The rock gardens in Japan are sacred places of contemplation, stillness, and reflection, a perfect balance weed out the pending stresses of day-to-day life. Such spaces typically contain little islands of rock covered with delicate moss and perfectly shaped patches of grass and shrubs, with rocks and boulders of a variety of sizes and beds of gravel to complement such an idyllic scene.

The Japanese rock garden is a type of garden featuring an almost entirely dry landscape, and is also known as “Zen garden”, “Little African Rock Garden”, and “Alpine Garden”. Such gardens are rather unconventional in the sense that they are not crowded with an overwhelming amount of trees or intricate ponds and are meant to be appreciated from one specific point outside the walls of the garden. They are meant to be enjoyed form the inside and the whole atmosphere is supposed to become part of the viewer.

Japan’s concept of the rock garden gained significant popularity during the 5th – 8th centuries, which was the time during which Chinese Taoism started a great movement in Japanese art. Taoist belief states how in the midst of the ocean, there exists some three or five lone islands wherein immortals roam, which, in Japanese literature, is believed to manifest in a story whereby a fisherman saves a sea turtle and takes it back to one of the islands.

The fisherman then becomes immortal once he marries a princess from the islands, but his happiness is short-lived as he grows homesick. Upon returning to his homeland, he regains mortality, grows old, and eventually dies. Thus, gardens dating from this time typically feature an extensive use of ponds and trees and a distinct floating rock in the shape of a mountain, a symbol of eternal youth and immortality. 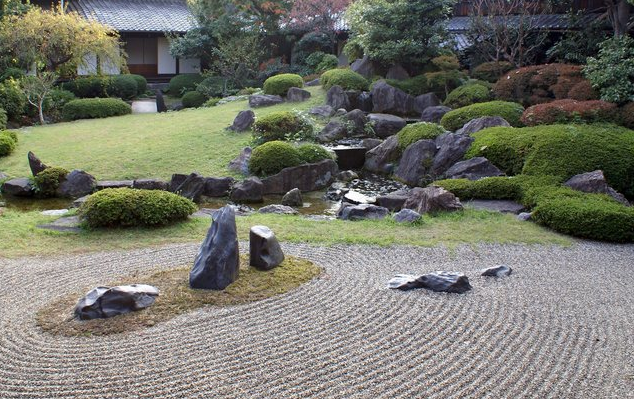 During the Heian Period (between the late 8th to the 12th Century), which marks the move of Japan’s capital to Kyoto at around 794, the attention of garden makers was averted from the Taoism belief to the building of a new culture of their own.

Ponds and islands remained, but other elements were introduced in an effort to personalize the gardens to the owner’s likings. Deciduous trees were added, resulting in foliage that changes colours depending on the season, breathing new life into the garden.

Once the Muromachi period came about (circa 14th – 16th Century), the concept of the Zen garden as known today was fully developed, and the style has retained its fame to the present day. While gardens of the Heian period aimed to reflect the fluctuations of life, the gardens of the Muromachi period were against the meaningless and materialistic aspects of the world. In response to this, the gardens were stripped bare and were constructed out of rock, sand, and gravel, with the occasional bits of bush, but still retaining the idea of simplicity in nature.